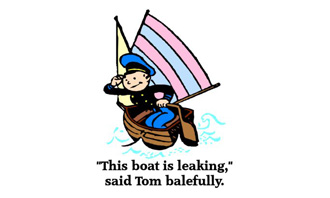 Ever heard of a ‘Tom Swifty’? Well, it’s a wonderful pun-loving phenomenon. Tom Swift is a fictional character from a series of books by Edward Statemeyer. The puns are based on adverbs or adverbial phrases … and they look like this –

‘Turn on the radio,’ said Tom with a short wave.
‘I’ll try to dig up a couple of friends,’ said Tom gravely.
‘I got the first three wrong,’ said Tom forthrightly.
And for you German speakers, ‘Drei … funf,’ said Tom fearlessly.
‘That’s a very large herring,’ said Tom, superficially.
‘I have no flowers,’ said Tom lackadaisically.
‘Careful with that chainsaw,’ said Tom offhandedly.

Other articles in Flotsam & Jetsam